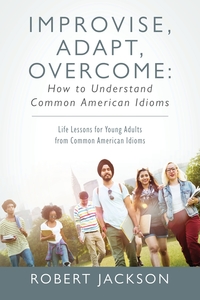 This book addresses many of the social issue’s facing young adults today.  They will interact with people who don’t look like themselves, or have the same traditions, culture or orientation.  Their quality of life as an adult may depend on many of the decisions they make today.  In this book students will learn it’s okay to be different and to accept all people as they are.  To treat all people as you would want to be treated; with dignity and respect.  To do your best and be the best you can be.  To be humble and kind.  To be patient.  To love your family and friends.  To do what is right and be a good person.  To keep getting up every time you’re knocked down; to not give up.  That bullying and harassment are not okay.  To understand that losing is part of a journey.  That we gain knowledge from our loses and keep moving forward.

The Marine Corps Core Values of Honor, Courage, and Commitment are presented to the reader as an example of how to conduct themselves with integrity, to do what is right, and to achieve a standard of excellence.

This book uses Idioms (sayings) to provide a different perspective of the English language; words that say one thing but mean another.  An example of a well know Idiom is the saying;” It’s raining cats and dogs.”  The saying doesn’t mean that dogs and cats are falling from the sky, but rather that it’s raining very hard. The book is divided into four chapters, the sayings in each chapter are divided into three parts.  The first part list the saying, the second part explains the meaning of the saying, and the third part provides an example that is relative to everyday experiences.  The third part is what differentiates this book from other books on Idioms

The first chapter provides lessons learned from everyday sayings.  Sayings that most adults are familiar with, but unfamiliar to most young adults. The second chapter provides sayings on how to:  save money, how to spend it, how to stretch it, how to budget it, and how to compound it.  Money management is one of the most important skills that must be learned to be financially stable.  The third chapter provides thoughts on leadership and character.  Leadership; it’s not about being the best, it’s about making other people better.  Chapter three is also about; positive thinking, not fearing failure (we all have failed from time to time), being decisive, and taking a stand.  Chapter four concentrates on how we interact with family members, friends, boyfriends and girlfriends, and employers.

Colonel Robert E Jackson is a retired United States Marine, a Vietnam Veteran and a recipient of the Purple Heart Medal for wounds sustained in combat.  Col Jackson has advanced degrees from both Springfield College, and Georgia State University.