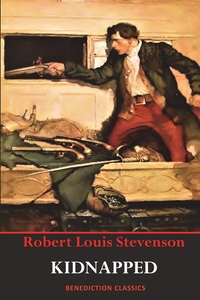 Stevenson was fascinated by eighteenth century Scottish history.  Kidnapped, set in eighteenth century Scotland,  is inspired by real events, notably the "Appin murder" which occurred in the aftermath of the Jacobite rising of 1745; many of the characters, such as Alan Breck Stewart, are based on real people.  The hero, David Balfour, was a composite of members of Stevenson's family.  However, Stevenson writes:

"This is no furniture for the scholar's library, but a book for the winter evening ... to steal some young gentleman's attention from his Ovid, carry him awhile into the Highlands and the last century, and pack him to bed with some engaging images to mingle with his dreams."

Kidnapped does just that, and, with its mix of suspense, crime, danger, escape, shipwrecks and pistols, it was an immediate success.  However, Kidnapped is more than an adventure story, and has been praised by writers including Henry James, Jorge Luis Borges, and Hilary Mantel.

This unabridged edition contains 60 illustrations by Louis Rhead, the well-known children's book illustrator.  The text is set in modern crisp easy-to-read font and would be a pleasure for children or adults to read.

The Scottish writer Robert Louis Stevenson, a celebrity during his lifetime, is best known for Treasure Island, Kidnapped, The Strange Case of Dr Jekyll and Mr Hyde, and A Child's Garden of Verse. He was a great traveller, journeying to Europe, America and the South Pacific, where spent his last years in Samoa.  There he was much loved by the Samoans who called him Tusitala (Samoan for "Teller of Tales").