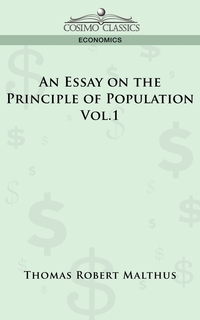 An Essay on the Principle of Population - Vol. 1

Дополнительная информация
Аннотация к книге "An Essay on the Principle of Population - Vol. 1" Thomas Robert Maltus, Thomas Robert Malthus:
Around 1796, Mr. Malthus, an English gentleman, had finished reading a book that confidently predicted human life would continue to grow richer, more comfortable and more secure, and that nothing could stop the march of progress. He discussed this theme with his son, Thomas, and Thomas ardently disagreed with both his father and the book he had been reading, along with the entire idea of unending human progress. Mr. Malthus suggested that he write down his objections so that they could discuss them point-by-point. Not long after, Thomas returned with a rather long essay. His father read it and was so impressed that he urged his son to have it published. And so, in 1798, Thomas Malthus' An Essay on Population appeared. Though it was attacked at the time and ridiculed for many years afterward, it has remained one of the most influential works in the English language on the general checks and balances of the world's population and its necessary control. Volume 1 includes: Book I: "Of the Checks to the Population in the Less Civilised Parts of the World and in Past Times" and Book II: "Of the Checks to the Population in the Different States of Modern Europe." ALSO AVAILABLE FROM COSIMO CLASSICS: Malthus' An Essay on Population-Vol. 2 THOMAS ROBERT MALTHUS, born in 1766 and educated at Jesus College, Cambridge. In 1798, he was curate at Albury in Surrey, and become Professor History and Political Economy at Haileybury College, 1805. He died in 1834. Читать дальше…