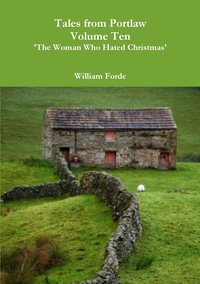 Tales from Portlaw Volume Ten - 'The Woman Who Hated Christmas'

Дополнительная информация
Аннотация к книге "Tales from Portlaw Volume Ten - 'The Woman Who Hated Christmas'" William Forde:
It was the marked contrast between people who loved and the people who hated Christmas, which inspired this story. 'The Woman Who Hated Christmas' tells the story of one such person, Beth Malone. As a child of ten years around Christmas Day Beth's mother dies in childbirth along with the stillborn infant. Sickened with grief, her father becomes emotionally unstable, is committed to the psychiatric ward of a local hospital and commits suicide. Left on her own with two younger sisters, Beth and her sisters are taken into Care of the Local Authority. The family is forcibly separated and do not see each other again. Beth rebels. Her foster homes are firstly resented by her and then come to be gravely feared by her. The story follows Beth through her life, first in Ireland, then in the mills of West Yorkshire, then on the streets of Manchester and finally back in Ireland where the story ends. For Beth, the experiences of Christmas are ones she would prefer to forget. Enjoy Читать дальше…