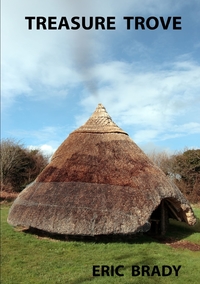 Дополнительная информация
Аннотация к книге "Treasure Trove" Eric Brady:
Dee and Trevor (13 year old Investigative Reporters) go treasure hunting and when their find of Celtic coins disappear overnight, they suspect the farmer whose land they are on, so decide to investigate. They include Our Bunch, Dee's group of close school friends, in this. The police become involved, setting up a 'Sting' operation, but fail to trap the farmer. Dee and Trevor are asked by Nellie Grainger (6 yrs.) the daughter of a neighbouring farmer to check what she calls a 'Goblins Grotto'. The ground collapses under them plunging them into a cave system. Being in danger of drowning from the cave beginning to flood, they manage to escape into an underground Cold War headquarters bunker. Asked to be nearby when the police raid the farmer's property they see him escaping and follow. His getaway car crashes and catches fire. They are first on hand and have to rescue the farmer and his son. With the co-operation of a neighbouring farmer a Visitor Centre is established for the Celtic Settlement. Читать дальше…