Stinky Goes to College: And Doesn't Leave for Fifty-Eight Years! 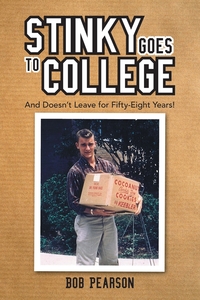 Stinky Goes to College: And Doesn't Leave for Fifty-Eight Years!

Дополнительная информация
Аннотация к книге "Stinky Goes to College: And Doesn't Leave for Fifty-Eight Years!" Bob Pearson:
In 1956, Bob "Stinky" Pearson began attending college. From that time until the present, he has always been connected to higher education in some way, as a student, teacher, coach, and administrator at various colleges and universities around the United States. In this second volume of his memoirs, Pearson picks up his life's story at the start of his college career, at Michigan State. He graduated from Brockport State in 1960, and what followed was a fifty-four-year career in university-level education and administration. Pearson shares nearly one hundred humorous and interesting moments and anecdotes from his collegiate and professional life, recalling many of the best and brightest students and coworkers whom he encountered along the way. Offering self-deprecating humor and inspiring insights, this memoir provides reflections, recollections, and teachable moments from a career spent in America's colleges. Читать дальше…