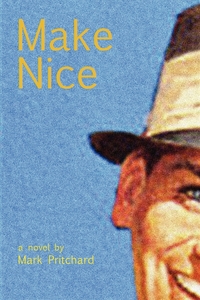 Дополнительная информация
Аннотация к книге "Make Nice" Mark Pritchard:
It's 1960, and Frank Sinatra is at the height of his power and influence in Hollywood. Bobby Blaine, a peripheral member of the Rat Pack, chafes under the singer's egomania and bullying. He tries to land roles without Sinatra's help and encounters only failure, until he is asked to do one last favor: pick up Marilyn Monroe in Reno, where she is having a nervous breakdown trying to finish "The Misfits," and deliver her into the clutches of Sinatra's Mafia pals at the Cal-Neva Lodge. Bobby hires Gene, a 20-year-old would-be beatnik, as his driver. Gene falls in love with a Mexican-American motel maid, encounters the racism of the day, and like Bobby, tries to become his own man. Bobby and Gene's struggles shine a light on the hidden ways of the world of the early 1960s, where a presidential candidate could carry on affairs under the nose of reporters, a world of Hollywood double-crosses, political shenanigans, bad Beat poetry, a hapless Broadway producer, and a comedian with a broken heart. Читать дальше…