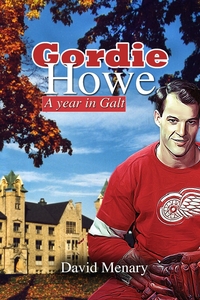 Дополнительная информация
Аннотация к книге "Gordie Howe: A Year in Galt (Softcover)" David Menary:
Third edition softcover version of David Menary's "Gordie Howe: A Year in Galt" which highlights a pivotal year in Howe's youth - the year a young prairie boy left his home to go east to Galt, Ontario, for the 1944-45 hockey season. Away from home for the first time, he was 16 that season, and too shy to attend the local high school. Howe became a fixture with the Galt Junior A Red Wings, even though he was unable to play any league games in the OHA. The team already had a western import - Terry Cavanagh, later the mayor of Edmonton - but coach Al Murray convinced him to stay with the team to practice and play exhibition games. Howe and some of his teammates recall many of the people associated with the team from that year. Subsequent visits back to Galt (Cambridge), and the historic arena which was reminiscent of the Olympia in Detroit, showed Howe at his off-ice finest; a kindly, considerate man whose characteristic humour and palpable decency endeared him to old man, maiden, young man and child. Читать дальше…