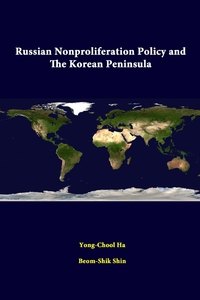 Дополнительная информация
Аннотация к книге "Russian Nonproliferation Policy And The Korean Peninsula" Yong-Chool Ha, Beom-Shik Shin, Strategic Studies Institute:
Russia is one of the members of the six-party talks on North Korean nuclearization, but its views on how to deal with this problem do not agree with those of the U.S. Government. This signifies a gap between Moscow and Washington over the proper way to deal with proliferation and represents a change from the earlier pattern of bilateral cooperation in 1987-96 that led to significant achievements in the field of arms control and nonproliferation. We may attribute the major differences between Moscow and Washington to several factors, but two stand out here. One is that Moscow prefers a different model of resolving proliferation issues than Washington apparently does. Moscow's preferred option is the so-called Ukrainian model, whereby the proliferating state is induced to relinquish its pursuit of nuclear weapons through a multilateral negotiation in which it receives both economic compensation and security guarantees from its partners. Читать дальше…