Loveache: A NOVEL EXPLORING THE TRANSFORMATION OF GOOD MEN TO BAD MEN 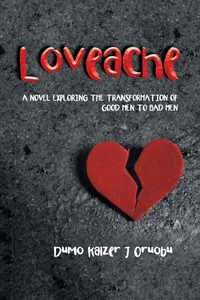 Loveache: A NOVEL EXPLORING THE TRANSFORMATION OF GOOD MEN TO BAD MEN

THE NOVEL LOVEACHE,
IS IT EXPLORATION OR THE STUDY OF …?
As in many a work of fiction in the conventional or traditional sense, two Characters dominate the things that happen from cover to cover here in Loveache – Ibifaa and Ekine, Heroine and Hero or Hero and Anti-Hero? Who transit quickly from man and woman to Husband and Wife, each one of them with dreams and expectations all their own for entering into that union, discovering soon enough too, how much of strange bed fellows that they are even before the resonance of the wedding bells die down on them and on the ears of the huge crowd that witnessed it’s solemnization in Metropolitan Lagos.

The two major Characters all hail from Kalabari land, but only Ekine has his umbilical cord buried in the soil of that their common Ancestral land.

Ibifaa’s beginnings, her past and her present as well as her future being firmly rooted in Lagos – Lagos, home to her forebears, if her forebears are but her father and her mother – Lagos which Ekine sees only as a temporary farm land or fishing ground or settlement from which he would go back home to his roots at the fullness of time.