The Eleven Brothers of Joseph: A Novel About Joseph, Egypt, His Brothers, Sisters And Cousins Today. 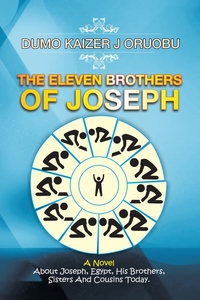 The Eleven Brothers of Joseph: A Novel About Joseph, Egypt, His Brothers, Sisters And Cousins Today.

The word drama and all of it’s various forms – declension elementary Latin would prescribe, or connotation, have been used in many places and circumstances that I know. But I cannot remember any one instance where all those forms have been used as an amalgam – harnessed in any
one place as it has been used in this work The Eleven Brothers Of Joseph, from the opening lines to the very last line, and as beautifully and masterfully as I have found it
to be used in here.
The Novel is simply dramatic, and, therefore, I believe, will arrest the attention of every Reader just as it arrested mine, with the age old phrase The suspension of disbelief even more meaningful here than in many other situations that I know as well. There are three Principal Josephs here – Joseph the origin of the title as he exists in the pages of the Old Testament of the Christian Bible and Doctrine, Professor Amaibi the Hero of the Novel, and Joseph the Professor of Electronic Engineering, Bishop and Farmer – the modern day Farmer and owner of the Zeedee Farms and Tourist Centre in the former Dahomey Republic, present day Republic of Benin
who is not given any name.