The Sacred Trust: A Historical Account of Commitments and Failed Promises to Our American Veterans 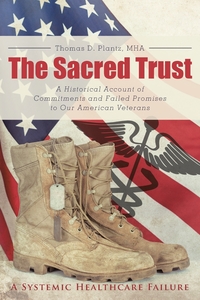 The Sacred Trust: A Historical Account of Commitments and Failed Promises to Our American Veterans

It’s been hundreds of years since United States war veterans entered a covenant with their government—one that promised they would be cared for physically and mentally.

But the scandal that broke out at the Carl T. Hayden Veterans Medical Center in Phoenix, in May 2014, showed that one side is not holding up its end of the bargain. That scandal rolled across the nation to other Veterans Affairs facilities, and the crisis is far from over.

Thomas D. Plantz, a retired health care executive and Vietnam combat veteran, highlights through his dedicated analysis how the VA and all levels of government have failed to ensure that veterans—in a timely manner— can access health care services. While the VA provides many excellent specialty services at its 150 acute care hospitals and 820 outpatient clinics, Plantz argues that its warts and blemishes distract from the good work provided by its physicians, nurses, and support personnel.

The VA’s problems must be tackled, and a newly-elected president working in concert with a committed Congress, new VA executive leaders, and a public dedicated to providing treatment to our nation’s veterans would restore The Sacred Trust.