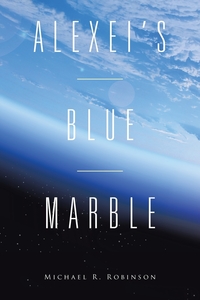 Alexei’s Blue Marble is set aboard a cruise ship embarking on a five-day journey to the Bahamas.
Twelve-year-old Alexandre Kristian, originally from France, tells this story of his life and his crazy cruise, which is a birthday present from his adoptive parents. At age seven, Alexandre lost his birth parents in a car accident on a country road in France. Soon he was adopted by an American couple and was brought to Virginia. He lost one kidney, and his remaining kidney was damaged in the same accident.

Alexandre is still stricken with grief over the loss of his birth parents. He grapples with his feelings of confusion about the meaning of life and death. He wishes he had died with them.

Alexandre also has a hero, an individual from history, Alexei Romanov, Crown Prince of Russia, who was executed in 1918 at age thirteen. Thus, Alexandre prefers to be called Alexei.

During the cruise, Alexei finds many adventures and makes new acquaintances who have profound impacts on his present and future life. These new acquaintances include a beautiful girl and a rough boy with an attitude who sees Alexei as a threat to him.

Alexei loses his kidney. Hospitalized and under anesthesia, Alexei had a vivid dream: a face-to-face encounter with Alexei Romanov, who helps convince him that it is good to be alive and that his parents would have wanted that.