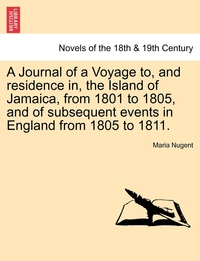 Дополнительная информация
Аннотация к книге "A Journal of a Voyage to, and residence in, the Island of Jamaica, from 1801 to 1805, and of subsequent events in England from 1805 to 1811. Vol. II" Maria Nugent:

The NOVELS OF THE 18th & 19th CENTURIES collection includes books from the British Library digitised by Microsoft. The collection includes major and minor works from a period which saw the development and triumph of the English novel. These classics were written for a range of audiences and will engage any reading enthusiast.