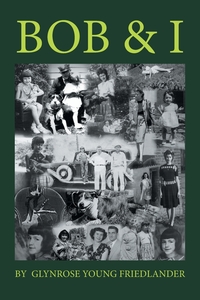 Glyn and Jim didn’t meet until their early 40s, and on the rebound from failed marriages. Interest turned into liking, friendship into love. A warm, adult love. After many years, they began writing together, for each other and for family and friends.

Glyn’s autobiography written in her 80s and now published posthumously, tells about a vital, wise, and intuitive girl and covers her formative years. Her parents an irresponsible, incompetent roguish cop father and loose mother, were both hard-drinking products of the Roaring 20s, Flappers, the Charleston and all that Jazz. Raised in small towns of the Depression afflicted Middle West, Glynrose Young developed into a responsible, mature young lady of strong character, uncompromising honesty, with ambition and consideration of others. The venue changes to the great American Southwest, but constantly in the background loom the Great Depression and World War 2 casting their shadows on Glyn and her generation.

Even as a toddler and not even knowing the word, she could sure spot a hypocrite and pledged herself not to become one. Her fine qualities she attributes to the influences of chance, near-strangers, relatives, neighbors and friends. But most of all….. to Bob. Bob, the gentlemanly family dog was an American Staffordshire Terrier mix, commonly known as a Pit Bull. Born almost the same time as Glyn; they were brought up together. Dogs, as we all know, mature so much faster than we mere humans. And die so much sooner. Bob, seeing his job well done, left Glynrose 73 years before she went to join him. But he left his stamp on her for the rest of her life.