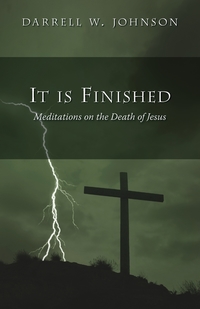 Дополнительная информация
Аннотация к книге "It Is Finished" Darrell W. Johnson:
Nearly two thousand years ago a young Jewish rabbi known as Jesus of Nazareth was nailed to wooden beams and hoisted above the skyline of the city of Jerusalem. Christians ever since have proclaimed that this event, symbolized by the cross, lies at the very center of their faith. Indeed, they have claimed that in the cross event God has actually "saved the world." But how could a single man's execution centuries ago have anything to do with us in the twenty-first century? In these meditations, Darrell Johnson probes the mystery and majesty of the cross, exploring it from various angles and illuminating this core belief of Christian faith in its multiple dimensions.

Darrell W. Johnson has served as a professor at Regent College, Vancouver, since the Fall of 2000, teaching in the areas of preaching, worship and pastoral theology. He is known for his faithful and engaging exposition of Scripture. Before joining the Regent faculty, he served as pastor of a number of Presbyterian congregations in the United States, as well as Union Church of Manila, Philippines. He is the author of Experiencing the Trinity, Fifty-Seven Words That Change the World (on the Lord's Prayer) and Discipleship of the Edge (on the book of Revelation).
Читать дальше…