When Eternities Met: A True Story of Terror, Mutiny, Loss, and Love in a Disremembered Second World War 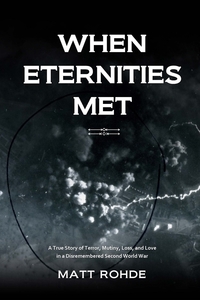 When Eternities Met: A True Story of Terror, Mutiny, Loss, and Love in a Disremembered Second World War

When Eternities Met is the true story of the wartime odyssey of five young lives, two boys and a girl coming of age in a small town in the American Midwest and another teenage boy and girl mired in the ‘bloodlands’ of Central Europe. Their vantage point illuminates a Second World War not found in the great histories, a war of ambiguity and ambivalence. It is the war as it was for many, if not for most.

When Eternities Met delivers a fresh and bracing perspective on the familiar, from the Allied bombing campaign to the Ardennes and the crossing of the Rhine at Remagen. A ground-level spotlight is cast on the war’s lesser-known, including an American massacre of thousands of civilian refugees that takes less than an hour, a mutiny by Ukrainian Waffen-SS troops in France who then join the local resistance while attracting the attention of the OSS, the SOE, and the NKVD, and a young death that turns a brash joke over some beers into a lifetime promise.

A wartime chronicle with a particular twenty-first century resonance, When Eternities Met is drawn from numerous interviews, hundreds of letters and other personal documents, and archival research in France, Germany, London, and Washington.  The main text of the nonfiction tale is buttressed by an additional hundred pages that include almost eight hundred endnotes documenting the sources used, while also providing additional tidbits of information and musings on the war, war historians, and some of the surprising connections to issues faced in our current disjointed age.