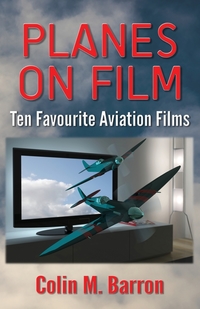 One of the most durable genres in cinema, the aviation film has captivated audiences for decades with tales of heroism, bravery and overcoming seemingly insurmountable odds. Some of these movies have become national icons, achieving critical and commercial success when first released in cinemas and still attracting new audiences today.

In Planes on Film: Ten Favourite Aviation Films, Colin M. Barron reveals many little-known facts about the making of several aviation epics. Every movie is discussed in comprehensive detail, including a thorough analysis of the action and a complete listing of all the aircraft involved. With information about where the various planes were obtained from and their current location, the book also explores the subject of aviation films which were proposed but ultimately never saw the light of day.

With illustrations and meticulous factual commentary, Planes on Film is a book which will appeal to aviation enthusiasts, military historians and anyone who has an interest in cinema. Written by an author with a lifelong passion for aircraft and their depiction on the silver screen, Planes on Film presents a lively and thought-provoking discourse on a carefully-chosen selection of movies which have been drawn from right across the history of this fascinating cinematic genre.