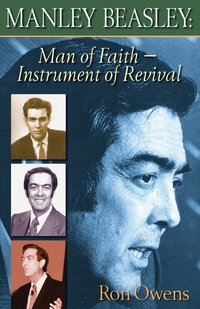 This is the story of not just a man, but of his message—a timeless message for every generation—a message greatly needed in our day. On these pages are found the biblical principles of faith and of how to deal with adversity. From intensive care units to the pulpits of America and beyond, Brother Manley, as he was known to the thousands of lives he touched, goes on living through the testimonies and teachings found in this book that some are saying is destined to become a classic.

ABOUT MANELY BEASLEY: Manley Beasley was a remarkable and powerful Southern Baptist evangelist who struggled for his last two decades of life with the pain and debilitation of multiple fatal illnesses. Throughout the difficulties, Beasley maintained his faith and said God was using his weaknesses for His greater glory. Beasley died in 1990 at age 58. Beasley's friend and colleague, Ron Owens, writes about Beasley from the perspective of one who watched him up close, knew his innermost struggles, and admired him greatly. The book offers excellent insight on where is God when a Christian suffers and what are the purposes of Christian suffering. The book utilities numerous personal testimonies from Beasley's friends and family members as well as his own words spoken in sermons, personal conversations, and interviews.

ABOUT THE AUTHOR: Ron Owens--born in Canada, son of missionary parents to Europe, has multi-faceted ministries. These include teaching, preaching, and music ministry primarily in North America and Eastern and Western Europe. He has authored several other books and articles, is a former associate to Dr. Henry Blackaby, and has composed, recorded, and had published many songs in collaboration with his wife, Patricia. The Owens have one son, Jeff; a daughter-in-law, Jessica; and two grandsons, Ethan and Evan.