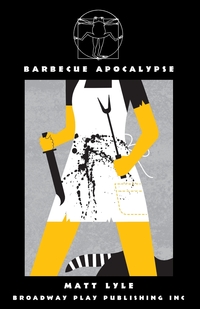 “The vast reservoir of pop culture Lyle mines to create dialogue that is both realistic and stylized reveals a kind of Aspergery love of language that’s hard to overpraise. The play isn’t laden with jokes so much as a way of saying things with hilarious understatement. You may want to see it twice just to hear all the lines you missed the first time.”
Arnold Wayne Jones, Dallas Voice

“It could have been enough for Lyle to set the entire play at this awkward, weird, and painfully honest barbecue; he still would have ended up with an engaging lark that’s sitcom-funny. But then he decides to end the world.”
Lyndsey Wilson, D Magazine

“BARBECUE APOCALYPSE suggests, in no uncertain terms, that these thoroughly average Americans were far more savage when they were sipping mango margaritas and failing to make small talk as compared to a year later when their new hobbies include devouring raccoons and threatening to stab electronic devices, among other acts defined as depraved by current standards of decorum.”
Kevin Greene, Chicago Stage Standard