Policing for Profit: Exposing Corruption Between Police, Courts and Corporations 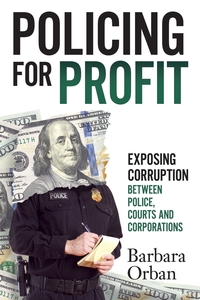 Policing for Profit: Exposing Corruption Between Police, Courts and Corporations

POLICING FOR PROFIT presents a startling, yet timely exposé demonstrating that some U.S. metropolitan police departments are more interested in running a business than being a presence on the streets “to protect and serve”—and they’re getting away with it—measuring success by both ticket and arrest “productivity.” But they are not alone! Such police department revenue-producing ventures can only be achieved in partnership with greedy courts and unscrupulous proprietary interests.

To make matters worse, in Florida, state law actually incentivized “policing for profit.” Beginning in 1999, police officers in municipalities must, by law, receive “extra” pension benefits if increasing auto insurance is paid in their community, a feat easily accomplished by writing more traffic tickets! The undeniable and compelling evidence put forward proves clandestine ticket and arrest quotas—as covertly practiced in cities such as Tampa, Florida—result in fraud, while creating a wealth transfer from the public to police, courts, state government, auto insurers, and private vendors for courts, jails and prisons.

The remedy is public awareness and demand for improved accountability systems to prevent this fraudulent abuse within the so-called justice system. The story shines a light on policing for profit tactics, including ticket quotas, arrest quotas, kangaroo courts, how quotas can result in fraud, how proprietary interests profit from tickets and arrests, and the lack of external oversight of law enforcement agencies and courts, as illustrated in the federal court case Orban versus the City of Tampa.