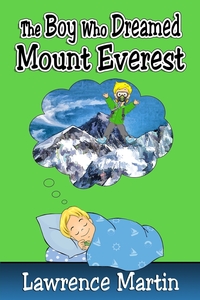 A ten-year old boy, Eli, loves to rock climb in Bubba’s indoor gym in Chicago.  He has never been on a real mountain, but fantasizes climbing Mount Everest.  He has studied books and web sites about Everest, memorized the popular Southern climbing route from Base Camp, and read about all the dangers.  He knows the youngest person to ever reach the summit was thirteen years old.

Soon he starts dreaming about making an actual climb, as part of Bubba’s Kids’ Expedition:  Eli and his four rock-climbing buddies, plus one parent for each kid, several Sherpas and their fearless leader, Maxwell.

During the day Eli functions as a normal boy, attending school and working on fifth  grade problems.  But at night he dreams, with each dream bringing him closer to his goal of being the youngest person ever to climb Mount Everest.

There are problems on the mountain.  Three of the boys drop out, one from altitude sickness, one from an injury and one from hypothermia.  The team comes across a dead body.  A Sherpa falls down a steep ledge.  Eli becomes stressed at home and at school.  He wants to tell his classmates about his dreams but is afraid they’ll make fun of him.  His parents are understanding, but Eli’s seven-year old sister Iris questions his wisdom in wanting to climb this mountain.

As he ascends ever higher, Eli is torn between wanting the dreaming to stop and wanting it to continue.  The dreaming does continue until, finally, he and one other boy reach the summit.  He wakes up excited, then wakes his parents to tell them the good news.

He does not dream about climbing down the mountain, and is glad about that.  He knows there are as many dangers coming down as going up.  The book ends with Eli proudly giving a Show and Tell to his fifth grade class titled ‘How To Climb Mount Everest’.