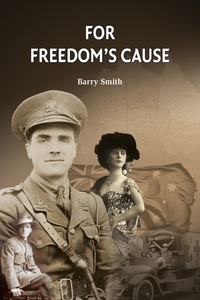 For freedom’s cause is a historical, romantic thriller set in England and Australia between the world wars. It follows the adventures and growing relationship between a working class English Army Officer, from Manchester-Dan Bevan-and a Melbourne barrister, serving with the Australian Light Horse-Charlie Elliott-who met, by chance, during the First World War and the strong women in their lives.

Having survived several of the major battles, both men are so disillusioned with the homes and occupations they return to, that Dan volunteers to suppress the republican rebellion in Ireland and Charlie joins an underground army to stand-up against mob riots in Melbourne. Despite their contrasting social origins and differing views on what form of government is best for preserving freedom and maintaining civil order, they become firm friends and when Dan is targeted by vengeful IRA assassins, he accepts Charlie’s invitation to escape to Australia where he intends settling down peacefully in Melbourne, with the love of his life who unknown to him has born him a son.

When IRA gunmen pursue him from Melbourne to Perth he is forced to flee to a cattle station in the Kimberley where, finally reunited with his wife and son, he confronts his nemesis in that vast and mystical wilderness.