The Guide to Being Bear Aware 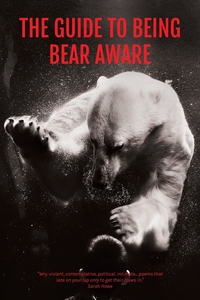 The Guide to Being Bear Aware

ncorporating a breathtaking sweep of international literary and philosophical influences and drawing deeply from the great European poets of the 20th century, The Guide to Being Bear
Aware is a poetry collection for our time. From incisions into the political and moral factionalism which so often dominates our online  existence, to sincere negotiations of our private lives,
our bodies and our minds in love and in death. This is not only a collection about the ephemerality of human life, but the Anthropocene – the permanently altered world we will leave behind.

"... advice for living in a world gone awry. Wry, violent, contemplative, political, intimate and raucous by turns, these are poems that laze on your lap only to get their claws in. Morphing into unfamiliar shapes beneath the watching eye, these refreshing, quizzical, well-traveled poems forge a world entirely their own: they won’t let you go of you easily.”  —Sarah Howe

“A markedly original enterprise which carries with it another thrust – toward sharing, even collaboration – that has been central to much of his earlier work... It is all new as I read him, all special, and I’m drawn to follow him now wherever he takes us.”  —Jerome Rothenberg