AMYRAUT ON PREDESTINATION: The first published translation from the French by Dr Matthew Harding 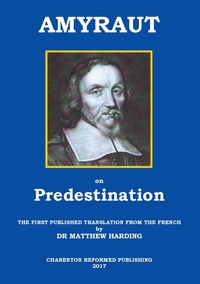 AMYRAUT ON PREDESTINATION: The first published translation from the French by Dr Matthew Harding

From the Translator’s Introduction

The work which you hold in your hand is priceless. It is priceless not because it is intrinsically more valuable than any other great work of the seventeenth century or beyond, or because it is a free book to you the interested reader—you have paid an exact, fair price in acquiring this copy no doubt—but this text is priceless rather because not everybody gets a second chance to be heard in this lifetime. For most of us, God grants a short season in this life in which we find our usefulness for His kingdom and then, well, we expire; sadly, most of us will be unreservedly forgotten after we leave this earth. Our ideas, our works, our impact in our generation, and our voices are extinguished for the ages when we die. Forgotten, we are relegated to the annals of history, and then most of the world will never know we even existed. However, this is not always true! For some, for those that God would use to be a voice of change and hope for many generations after them, their voices, though faint, are still heard. This is the case with Moses Amyraut (French spelling is Moïse Amyraut), a seventeenth century (1596-1664) Frenchman whose voice carries on today with a message as relevant as the day he penned it.

From the biographical outline

Amyraut is chiefly remembered for setting the cat among the pigeons over the theology of predestination. When a Roman Catholic nobleman – otherwise sympathetic to the Reformed Faith – expressed doubts about what he perceived to be Calvin’s teaching, Amyraut responded with his first work on the subject. However, his Brief Treatise on Predestination (1634)# aroused the wrath of the Reformed world when he expounded a position on election, the extent of the atonement and ‘universal grace’ at odds with accepted wisdom. Starting what Bayle described as a ‘kind of civil war among the Protestant divines of France’, it soon became clear that Amyraut – heavily influenced by Calvin – was pursuing a very different theological agenda from ‘orthodox’ theologians like the ‘French John Owen’ Pierre du Moulin, but one that was not exposed to many of the biblical objections raised by many then and subsequently.