Impact of Christianity on Indian and Australian Societies 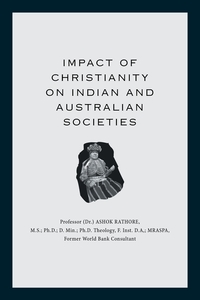 Impact of Christianity on Indian and Australian Societies

This book by Professor (Dr.) Ashok Rathore compares influence of Christianity on Australian Dreamtime belief and Indian Hinduism (Sanatan Dharm) religion. This is innovative work of theology and sociology with mature understanding of Christianity in two Indian subcontinents and Australian continent. The author has worked in America, Australia, and the Philippines and interacted with people of various faiths and religions (Jews, Christians, freemasons, Mormons, Jehovah's Witnesses, Buddhists, Unitarians, atheists, and numerous movements). Being a skeptic, the author always asked this question: where and why do we differ and have different religions, and where do we converge? In the world, with over two billion Christians, why is Christianity so popular worldwide? Why does Christianity remained stagnant at 2.3 percent in India? Whereas Christianity arrived in Australia only 227 years ago from Britain and over 70 percent Aborigines were converted to Christianity. The book evince “There is no relative superiority of one religion over another. The world needs is a fellowship of faiths for a common goals for a global ethic which rejects conflict, revenge, aggression and retaliation with the foundation of love. The book is expected to serve as an important component to improve relationship for theologians, biblical scholars of different religions at an international level in both countries so that a common set of core values is found in the teachings and understanding of different religions and this will form the basis of a global ethic as recommended by the 1993 Parliament of the World.

India is called the Land of Faith and Religion. One can witness the Indians practicing almost all the religions prevalent in the present world - Hinduism, Judaism, Islam, Christianity Buddhism, Jainism, Zoroastrianism, Sikhism and many others (including many movements and cults). Christianity's greatest contribution to our understanding of God is, Jesus of Nazareth.