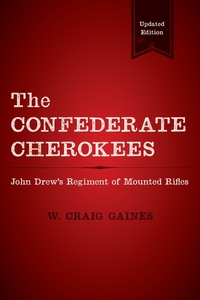 Although many Indian nations fought in the Civil War, general history often underrepresents the role of Native Americans in the conflict. Indian nations did, in fact, suffer a higher percentage of casualties than any Union or Confederate state, and the war almost destroyed the Cherokee Nation. In The Confederate Cherokees, W. Craig Gaines provides an absorbing account of the Cherokees’ involvement in the early years of the Civil War, focusing in particular on the actions of one group, John Drew’s Regiment of Mounted Rifles.

By the time the Civil War began, internal political dissension tore at the solidarity of the Cherokee tribe and a simmering thirty-year-old blood feud threatened to drive an even deeper divide. Entry into the war on the Confederate side intensified these intratribal tensions and ultimately two distinct factions emerged. One faction, loyal to Chief John Ross and led by John Drew—Ross’s nephew by marriage—formed a regiment. Another unit rallied around Ross’s rival, Stand Watie. The Watie regiment was largely pro-Confederate, whereas many of Drew’s soldiers, though fighting for the Confederate cause, secretly allied with a pro-Union, antislavery society known as the Keetoowahs. They had little sympathy for the southern whites, who had driven them from their ancestral homelands in Alabama, Georgia, North Carolina, Kentucky, and Tennessee. Drew’s regiment nonetheless earned a degree of infamy during the Battle of Pea Ridge, in Arkansas, for scalping Union soldiers.

Gaines unfolds the history of Drew’s regiment amid a larger narrative of military events within the Indian Territory. United action, as he shows, proved almost impossible because of continuing factionalism within the tribes and the desertion of many Native Americans to the Union forces. Indeed, Drew’s regiment, effectively disbanded by mid-1862, bears the distinction of being the only Confederate regiment to lose almost its entire membership through desertion to the Union ranks.