Where the Moose Slept: An account of two late-20th Century pioneers who "saw the elephant" on the last frontier 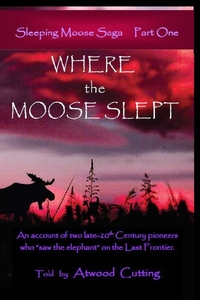 Where the Moose Slept: An account of two late-20th Century pioneers who "saw the elephant" on the last frontier

If the woods call your name, then you should follow. But if you can’t clear your schedule, you’ll want to read this book about life in the wilderness, before there were cellphones.

The quest for utopia is as old as Humanity, itself. “Where the Moose Slept,” a significant revision of volumes 1 and 2 of Tales from Sleeping Moose, is the first book in a trilogy that tells the story of two dreamers who join hands to bring into reality their visions of perfection.

The setting is deep in a field of wildflowers, far from any city. Kate, the poet, has come from Hawaii to Alaska, ‘to see a winter.’ It is during the Alaska oil boom, and two anachronistic romantics have heeded the call of the wild and journeyed to meet their life’s adventure in the far north.

Fact-based fiction, the “Sleeping Moose Saga” trilogy might be called a late 20th century pioneering epic. For the protection of all, the characters and location have been reconstituted, however the events are true. Some are documented with old family photographs, as well as several letters written from the isolated pioneer to her mother. These treasures were kept, and later handed down to the author, by her grandmother.

A perfect companion read to any academic study of Emerson, Tim and Kate’s pioneering odyssey takes his Transcendentalist vision of self-reliance, and puts real muscle into it.

Call it “Idealism meets Reality.” Unfortunately, the outcome of this particular wilderness experiment more closely resembles “seeing the elephant” of many of the mid-19th century covered wagon migrations west, than the well-deserved victory imagined by those hundreds of thousands of daring pioneers who left their homes in search of something greater.

Incorporating several mini-episodes, each one readable in a single sitting, the author describes battles with the uncompromising weather, the rarely navigable mud road, and the unfathomable neighbors living at the end of that road.

To some, her style might call to mind the writings of James Herriot for its earthiness and situational humor. The author well understands the world she is describing. Newborn Atwood Cutting was transported home on a snowmobile, and she lived her first decade right there on America’s Last Frontier, with her pioneering parents leading the way into the wilderness.

In telling her family’s tale, Cutting describes how cheechakos, Kate and Tim Peters, addressed such challenges as:

Colorfully transcribing a pre-technological lifestyle no longer embraceable by any but the most strictly-intentioned of ascetics, this true account of two newlyweds who voluntarily spend twelve years on a remote mountain, will likely evoke disbelieving skepticism in modern young adults, and fond memories in octogenarians. Nature lovers and DIY souls of every age will herald this quintessential adventure, as fascinating, enlightening, and intrinsically entertaining.