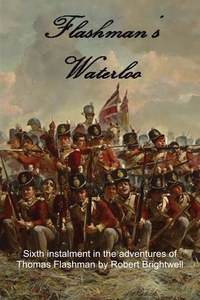 The first six months of 1815 were a pivotal time in European history. As a result, countless books have been written by men who were there and by those who studied it afterwards. But despite this wealth of material there are still many unanswered questions including:
- Why did the man who promised to bring Napoleon back in an iron cage, instead join his old commander?
- Why was Wellington so convinced that the French would not attack when they did?
- Why was the French emperor ill during the height of the battle, leaving its management to the hot-headed Marshal Ney?
- What possessed Ney to launch a huge and disastrous cavalry charge in the middle of the battle?
- Why did the British Head of Intelligence always walk with a limp after the conflict?

The answer to all these questions in full or in part can be summed up in one word: Flashman.

This extraordinary tale is aligned with other historical accounts of the Waterloo campaign and reveals how Flashman's attempt to embrace the quiet diplomatic life backfires spectacularly. The memoir provides a unique insight into how Napoleon returned to power, the treachery and intrigues around his hundred day rule and how ultimately he was robbed of victory. It includes the return of old friends and enemies from both sides of the conflict and is a fitting climax to Thomas Flashman's Napoleonic adventures. Читать дальше…