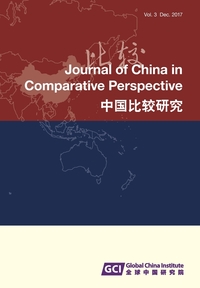 Journal of China in Comparative Perspective (JCCP) publishes original multidisciplinary and interdisciplinary comparative research on China on a wide range of topics in the social and human sciences. It encourages debate, cooperation and co-authorship on the same issue or theme from different disciplines (including politics, economics, international relations, history, sociology, anthropology, cultural psychology and methodology, among others). Its aim is to bring out the best in scholarship, transcending traditional academic boundaries in an innovative manner.

We encourage contributors to put China and the Chinese into comparative perspective as far as they can. JCCP will not be simply about China – there are already several excellent China journals. It will be about looking at China from a comparative viewpoint as a player in broader patterns of development, ideas, movements, networks, and systems. Comparison includes using China as a case study to examine a generally applicable theory, or drawing analytical conclusions from comparative data about China and some other country or context. The comparison may be regional or global, historical or contemporary, and it may involve a comparison of perceptions: China’s perceptions of others and others’ perceptions of China in the context of China’s encounter with the outside world in the political, economic, military and cultural sense.

In addition to research articles, research reports and commentaries, JCCP will also publish periodic symposia on selected topics, in-depth review articles on particular areas of scholarship and reviews of books of unusual quality and significance for the study of China in comparative perspective. Certain issues of the journal may focus on a particular subject, and we welcome suggestions for themes.

JCCP is a strictly non-partisan publication and does not support or discriminate against any political, ideological or religious viewpoint. In accordance with standard academic practice, articles submitted for publication in JCCP are subjected to a rigorous process of blind peer review. Although it was conceived as an academic journal, the editorial policy is to ensure that articles that appear therein are of interest beyond the academic arena to policymakers as well as readers with a general interest in China-related themes.