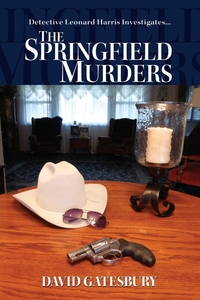 Detective Leonard Harris moves to Springfield, Missouri, a midsize Midwestern city, and gets embroiled in a rash of felony crimes. When Assistant District Attorney Elliott Hobson is shot to death on the street, panic ensues. Witnesses say a white Ford Crown Victoria pulled up and the driver, dressed in a tan police officer’s uniform, exited the car wearing a wide brimmed Texas Ranger styled hat and sunglasses. He drew a revolver and cold-bloodedly fired twice into Hobson’s chest.

The list of suspects is endless and a theory quickly emerges that he was assassinated as a revenge killing to leave police concerned for other public officials. The investigation hits a brick wall, but when others connected with the district attorney’s office are murdered, including a judge, rumors of a hit list persist.

The murders get nationwide attention when the FBI classifies the murderer as a serial killer. Springfield’s lead investigator, who inadvertently used the phrase The Springfield Murders to describe the killings, is murdered along with his wife in their home late at night. They think they have a thrill killer on their hands, but a jogger killed on a hiking path takes the investigation in a new direction.