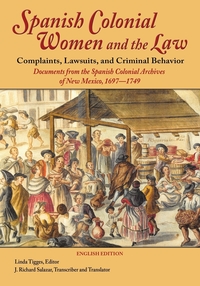 Women in early 18th century Spanish Colonial New Mexico had rights and privileges under Spanish law that were not enjoyed by other women in North America until the late 19th and early 20th century. Women were considered separate entities under the law and valuable members of Spanish society. As such, they could own property, inherit in their own name, and act as court witnesses. In particular they could make accusations and denunciations to the local alcalde mayor and governor, which they frequently did.

The documents in this book show that Spanish Colonial women were aware of their rights and took advantage of them to assert themselves in the struggling communities of the New Mexican frontier. In the documents, the women are shown making complaints of theft, physical and verbal abuse by their husbands or other women, and of non-payment of dowries or other inheritance. Other documents are included showing men accusing women of misrepresenting property ownership and dowry payments and of adultery and slander.

Spain was a legalistic society and both women and men used the courts to settle even minor matters. Because the court proceedings were written down by a scribe and stored in the archives, many documents still exist. From these, thirty-one have been selected allowing us to hear the words of some outspoken Spanish women and the sometimes angry men, speaking their minds in court about their spouses, lovers of their spouses, children, and relatives, as well as their land, livestock and expected inheritance. The documents translated into English in this book are a small number of the existing documents held in Santa Fe at the Spanish Archives of New Mexico, at the Bancroft Library at University of California, the Archivo General de la Nacion in Mexico City, and elsewhere. A synopsis, editor’s notes, maps, and biographical notes are provided. The material can be considered a companion, in part, to Ralph Emerson Twitchell’s 1914 two volumes, The Spanish Archives of New Mexico, available in new editions from Sunstone Press.

Sunstone Press has also published a Spanish/English edition both in both hardcover and softcover.