The Little Bach Book: An eclectic Omnibus of Notable Details about the Life and Times of the esteemed and highly respected Johann Sebastian Bach 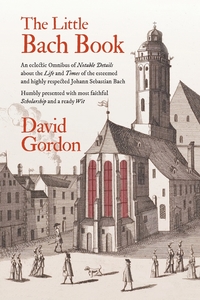 The Little Bach Book: An eclectic Omnibus of Notable Details about the Life and Times of the esteemed and highly respected Johann Sebastian Bach

A richly illustrated description of daily life in Leipzig, Germany in the 1730s, this is the only book about J.S. Bach that presents colorful vignettes of his career within a detailed context of the even more colorful everyday world around him. Written by a master storyteller and acclaimed performer of Bach's music.

After decades of singing Bach's music and lecturing about Bach and the world of the early 18th century, renowned Bach tenor David Gordon has compiled his favorite material into one volume. The Little Bach Book is a light-hearted scholarly look at Bach and the world around him, with a special focus on Leipzig, the city where he lived for 27 years and wrote most of his great masterworks. It is an eclectic selection of historical anecdotes, scholarly explanations, gee-whiz factoids, vintage illustrations, time lines, bits of pathos, facts about daily life, and true stories about Bach and his world in the 1700s.

In the 18th century, what did people drink instead of water? How did Bach light his home, and how did he write his music? Which concert killed Bach's principal trumpeter? How many of Bach's 20 children lived to be adults? What happened to Anna Magdalena after Bach died? What is the puzzle inside Bach's monogram? What did people eat and drink in Bach's time? What was the job application Bach sent to Dresden? What did everyone do just before getting into bed? How many church services did Bach oversee each week? What happened at the organ duel in Dresden? Why did Bach tell his cousin not to send him any more free wine? What was Bach's actual job description in Leipzig? How often did people do the laundry?

The Little Bach Book is filled with fascinating and sometimes unexpected answers to these and many other questions. The scholarship is serious, and the stories are fun, surprising,  and heartwarming!

150 pages, richly ilustrated, even a recipe for beer soup...